In honor of Halloween, here’s an excerpt from the Zombie Kama Sutra, which is a lot like regular Kama Sutra except that it’s aimed at the Undead:

In honor of Halloween, here’s an excerpt from the Zombie Kama Sutra, which according to Project Child Murdering Robot, is a lot like regular Kama Sutra except that it’s aimed at the Undead:

From Part 1st, Chapter 1st: On Getting Your Kicks When Your Bucket Has Been Kicked.

WOMAN is also divided into three classes, depending on the depth of her you-know-what. So too is UNDEAD woman divided into two classes, corresponding to the number of remaining limbs and brains also.

The temperament of the undead is based most especially on the proximity to brains. The brain is the most important sexual organ. The undead crave brains. The undead are attracted to the brains of one another.

Whatshisname says, “The undead male will feel a driven desire to slowly and inexorably move forward toward any source of food, but will willingly subsume the desire for food if there is anywhere in his field of vision a willing undead female coital partner. The undead woman is much more sensitive, and is likely to derive a pleasurable sense of contentment from the touch of the undead male, as evidenced by the low, monotonous moan that escapes from her decaying lips following the act of romantic congress. The undead female will expect from her undead romantic partner a reciprocating low, monotonous tone, sometimes known as ‘Pillow Moaning.’ The undead male, left to his own devices, would rather fall asleep.”

Of the various means of congress among the undead, there are many different types. These types are divided into several different categories: The Low, the Lower, the Gruesome, the Despicable, the Loathsome, the I’d-Rather-Not-Even-Think-About-It, and the Not Even if You Paid Me a Million Bucks, Even Though I’m Undead. 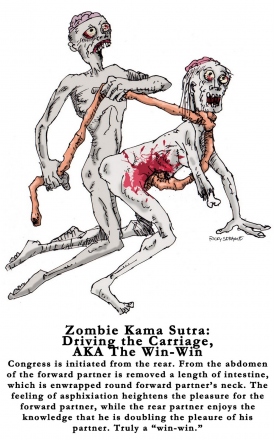