You know what they say… the couple that slays zombies together, stays together!

You know what they say… the couple that slays zombies together, stays together! At least that’s what Julian Sunmi Park and Benjamin Jinsuk Lee were thinking when they got married. Tired of the same old wedding photos that all their friends had, they went looking for a new, geekier option. What they settled on wasn’t super heroes or Star Trek, but it is still one of the coolest wedding photo shoots that we’ve ever seen.

Their zombie themed shoot is a romantic homage to The walking dead and George Romero’s Night Of The Living Dead. It is a lot of things, but mostly, it is awesome. With a sense of humor like this, the Lee’s are probably going to be together for a long time… or at least until 2012 when the zombie apocalypse kills us all! 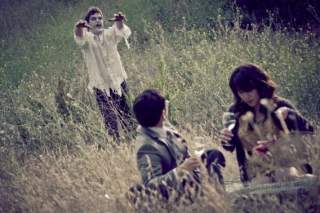