The Very Hungry Caterpillar… That Eats Plastics and Saves The World

I guess it will help solve the plastics problem… but will it give us an ethylene glycol problem in its place?

The Hungry Caterpillar has been a must read for pretty much every child since it was first published in 1969. As popular as it may be, it has nothing on one of its real life cousins that just might be one of the keys to helping eliminate the millions of tons of plastic waste that litter the planet.

Spanish Scientists are looking very closely at a caterpillar known as the wax worm (it got its name because one of its favorite foods are beehives), because it also seems to enjoy munching on polyethylene plastic, converting it into an alcohol found in antifreeze.

The discovery was made by Federica Bertocchini, at the Institute of Biomedicine and Biotechnology of Cantabria, in Spain. As with most world-changing ideas, this discovery was a complete accident. In fact, it didn’t even happen in the lab, but in her own back yard. She was cleaning up an infestation of wax worms in one of her personal beehives. After she removed all of the offending caterpillars, she put them in tied up plastic bag and left the house. When she returned, she found that the caterpillars had eaten themselves free.

Upon further research, she found out that the wax worms weren’t just chewing through the plastic, but were actually digesting it. They even found that if they pureed the worms and spread it on the plastic, 13% of it would convert to ethylene glycol within just 14 hours.

To give you a frame of reference, the same bags take between 100-400 years to biodegrade in a landfill. Now, the hope is that they’ll be able to isolate the digestive enzyme responsible for the feat and use it to treat landfills. I guess it will help solve the plastics problem… but will it give us an ethylene glycol problem in its place? 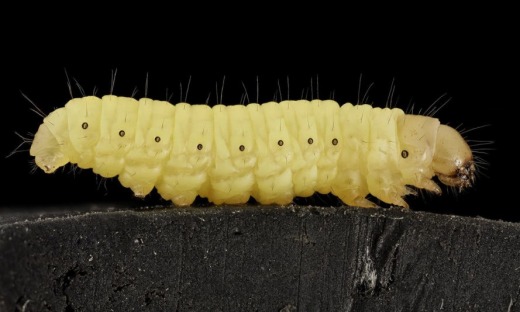