]International singer Charice Pempengco has gone under noninvasive cosmetic procedures for her debut on the second season of “Glee.” 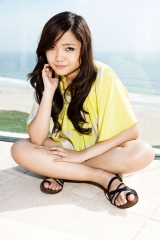 International singer Charice Pempengco has gone under noninvasive cosmetic procedures for her debut on the second season of “Glee.”

At 16, Charice became a YouTube viral sensation with her rendition of “And I Am Telling You I’m Not Going.” Since then, she has appeared on several international singing competition shows, “The Oprah Winfrey Show” and “The Ellen DeGeneres Show.”

According to her cosmetic surgeon, the now 18-year-old recently underwent a 30-minute Thermage procedure. Thermage is a single treatment skin tightening and skin contouring procedure. It is said to firm and tightening loose skin to give a younger looking appearance.

Of course at eighteen, you have to wonder why she would need to undergo such a procedure.

Surgeon Vicki Belo says it was to make the singer’s “naturally round face” more narrow.

Charice says she opted for the makeover “to look fresh on camera.”

“All people will be anticipating how will Charice look? Is she good enough to pit against Rachel Berry? So of course there is tremendous pressure,” she admits.

Charice will play a foreign exchange student and singing rival to Rachel Berry (Lea Michele. Filming for the second season of Fox’s mega hit begins at the end of July.