Vikings QB Announces He has Decided to Return… to the McFarlane Toys’ SportsPicks Lineups.

McFarlane Toys revealed a special a Target exclusive Brett Favre 2-Pack. Pretty Ballsy move by McFarlane considering Farve hasn’t decided on retiring or returning. As of today, it’s been reported that Brad Childress, head coach of the Minnesota Vikings, has flown to Mississippi to woo Farve out of retirement. I guess we’ll see come late August.

In the meantime, here’s the official press from Mcfarlane Toys:
Vikings QB Announces He has Decided to Return… to the SportsPicks Lineups

Record-setting quarterback Brett Favre energized the Minnesota Vikings last season and led them to the cusp of the Super Bowl, falling in NFC Championship Game overtime to the eventual champion New Orleans Saints. The “near-miss” has Vikings fans eagerly anticipating the upcoming season, and there’s no better way to get ready than to check out (and pick up) our Brett Favre 2-pack.

This 2-pack showcases the veteran gunslinger in his debut and sideline poses, both updated to Vikings jerseys (one in home purple, one in road white). As always, here’s your own personal invitation to enjoy the photography.

The Brett Favre 2-pack is exclusive to Target stores, and is expected to arrive in mid-August — just in time for football season. Stay tuned to Spawn.com and our Sports message board for more news and pictures of this and other SportsPicks figures. 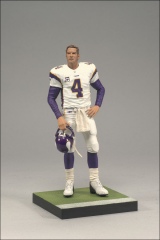 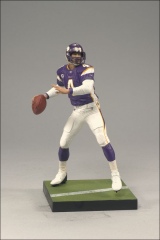