Capcom may be 0-2 trying to bring Street Fighter to the big screen, but according to Capcom’s vice president of strategic planning and business development, they are not giving up! 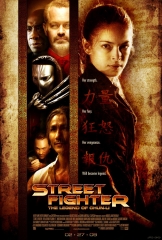 Capcom is 0-2, but they’re not giving up. Speaking to GamerLive.tv, Capcom’s vice president of strategic planning and business development, Christian Svensson announced that they are still moving forward with attempts to successfully adapt the classic Street Fighter video game franchise to the big screen.

Svensson even had a reason why “Street Fighter: The Legend of Chun-Li” was a colossal failure:

There’s a book to be written there. This is where I have to be careful. Let’s just say there were a lot of people with different ideas as to what was the best route to take with that movie. A path was chosen, a result was had. I think there are some learnings internally that we’ve taken away from that experience.

When asked about how movies will integrate into Capcom’s larger business plan, Svensson believes that it’s one of Capcom’s long term goals.

I think if you ask Haruhiro Tsujimoto, who’s our COO and President in Japan, the model he’s always put forward to us is the Marvel model. That is, Marvel’s business was comic books, but they have branched out and become a pop culture media company. I think that’s really the ultimate goal for Capcom in the long term. I don’t think it’s an easy path. It’s not an immediate path where this is going to happen, but we already do content expansion through a variety of media — novels, comics, and soundtracks.

Personally, I’m not sure how good of an example this is, considering a comic book is essentially a story similar to a movie. Whereas Street Fighter is two virtual guys punching each other in a face with little to no back story. But to Capcom’s credit, they are being very ambitious. And when there’s a will, there’s a way. “Mortal Kombat: Rebirth” proved that and hopefully it sets the right model for how Hollywood deals with video game IPs in the future especially with Street Fighter.

The fight must always go on as I would very much like to see a good live-action Street Fighter movie before I die.