The inspiration for George Lucas’s iconic Darth Vader and C3PO from the Star Wars universe may have been discovered today.

The inspiration for George Lucas’s iconic Darth Vader and C3PO from the Star Wars universe may have been discovered today. It appears as if Star Wars costume designers John Mollo and Bermans Nathans may have been inspired by some 19th-century smoke helmets that if compared, bare the resemblance to C3PO and the most baddest villain in the history if popular culture!

According to Collector’s Weekly:

“The black leather helmet on the left is labeled “Respirations Apparat” by “G.B.Konic Altona,” was made in Hamburg, Germany, and has the look of an African Dan mask. The brass, three-quarter face mask to its right was made in Paris by J. Mandet.

This type of breathing mask had a very simple apparatus, allowing only a short range of operation. When used, air would be forced into the helmet through no more than 13 meters of flexible tubing by means of a bellows operated remotely from the outside. Both of these masks have mica lenses to help protect the eyes from heat.”

Although Lucas has always kept mum about where he drew inspiration from, there’s no denying that these are the masks that brought life to his creation. It’s especially interesting to note that the 19th-century mask manufacturer was named Vajen-Bader, which sounds a lot like Darth Vader! 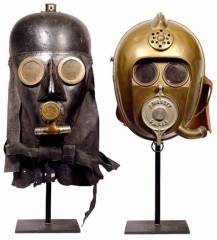