A favorite to win gold Vonn, will appear in SI’s annual swimsuit issue. 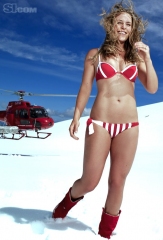 Lindsey Vonn who is a favorite to win gold at next week’s Winter Olympics in Vancouver, will appear in this year’s SI’s annual swimsuit issue (with Brooklyn Decker) and be featured in a multi-page photo spread. Inside and online (at SI.com), Vonn will pose with her ski gear, as well as appear in a sauna, standing on the slopes and posing with a rescue helicopter, all in her bikini (because it makes perfect sense!).

Vonn is one of those rare athletes that is the complete package. An outstanding athlete who’s fairly easy on the eye. In the past, models have often been selected to be on the cover of the SI swimsuit issue, but for the first time ever we’re seeing someone with a good chance of becoming the most decorated American Winter Olympians of all time. Think Michael Phelps, but much much hotter.

To see more of Lindsey Vonn, head on over to SI now.