David Duchovny Promises to Keep it in His Pants

“Duchovny’s attorney said he “has successfully completed rehabilitation. He is out and will very soon begin work on his new movie.” 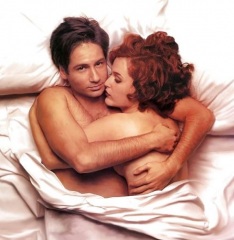 David Duchovny, the star of X-Files, The Red Shoe Diaries, and the cable show “Californication” has just wrapped up his stint in rehab for sex addiction. Just a couple months ago rumor ranging from affairs to 8 hour long cyber sex binges caused wife, actress Tea Leoni, to give the father of their two children an ultimatum.

In a statement on Monday, Stanton, Duchovny’s attorney said he “has successfully completed rehabilitation. He is out and will very soon begin work on his new movie.”

Stein declined to say where the actor had been treated or when he left the center.

Duchovny’s, next project is a film called “The Joneses” scheduled for release next year.

It has been said in the past the Duchovny has had this problem before. It kind of makes you wonder why he’d go and take a role like the one he’s got in “Californication”. His character had more sex partners in the series premier than the average guy does in four years of college.