Did A Bob’s Burgers Character Once Appear In ‘King Of The Hill’?

The answer is… Kind of!

Bob’s Burgers has been making people laugh on FOX since 2011, but it looks like One of the members of the Wagstaff faculty has been around for much longer than that. Mr. Frond, the school’s guidance counselor and a frequent punchline for the jokes on the show appears to have at one time been an anger management teacher in Arlen, Texas – Home of Hank Hill and the Hill family from the long-since ended FOX series, King of the Hill. In a December 2002 episode titled The Texas Skilsaw Massacre, Hank accidentally cuts off his friend’s finger with an electric saw. He is ordered to attend anger management classes where he meets the teacher. Check out this clip:

Not only is this unnamed anger management teacher dressed exactly as Mr. Frond dresses on Bob’s Burgers, but both characters are also voiced by ‘Office Space’ actor, David Herman.

It turns out that the whole thing could be because of Jim Dauterive. Before developing the show for FOX with creator Loren Bouchard, Dauterive served as both a writer and producer on King of The Hill. If you were a fan of the series, which ran for 258 episodes between 1995 and 2010, you may also remember that one of Hank Hill’s best friends on the show was his neighbor, Bill Dauterive. 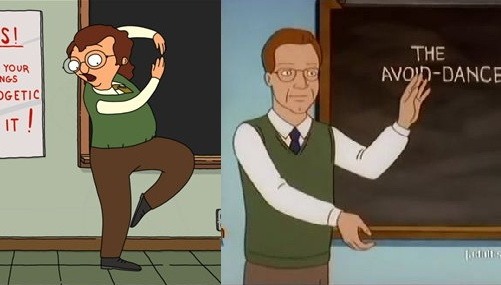