It didn’t seem too long ago that we reported Guy Richie and the ever increasingly strange Madonna getting a divorce.

Today, we’re reporting that according to rumors, Guy is completely unphased by the divorce and is over Madonna. In fact, it is believed that he is even currently shacking up with British actress Kelly Reilly, who is currently starring in his big screen adaptation of Sherlock Holmes.

According to a report by Us Weekly:

On Oct. 18 – three days after he announced he and Madonna were divorcing – he sent his driver back to his $12 million home in London’s Marylebone district “very last-minute” to pack an overnight bag for a stay at a nearby Chatham hotel — where Reilly is residing.

I’m sure they were just talking. 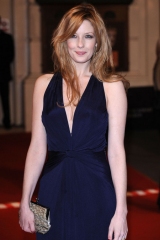