Cheetos have been working their way into fast food for years now. They’ve popped up in Taco Bell burritos more than a couple times. They are a popular addition to former hit items like Burger King’s Mac N’ Cheetos and now KFC is bringing them to the world of chicken with their new KFC Cheeto Sandwich.

The new fast food delicacy is currently being tested throughout the southern United States. According to the press release sent out about the sandwich, this is how it is put together.

“Made by coating a juicy, hand-breaded Extra Crispy chicken filet with special Cheetos sauce and placing it on a toasted bun with mayo and a layer of crunchy Cheetos, the Cheetos Sandwich will give you a blast of craveable Cheetos in every bite.”

So, it’s fried chicken with Cheeto juice, mayo, and Cheetos. Sufficed to say, the internet it reacting pretty strongly with everything from “Put one in my mouth right now!” all the way over to “it looks a lot like another, overly orange celebrity, get it away from me!”

What do you say? DO you want a bit of the KFC Cheeto Sandwich?

Check out a full review of the sandwich from a Youtuber who actually makes videos reviewing fast food. our favorite line from his review: “Unfortunately, it’s pretty good.” 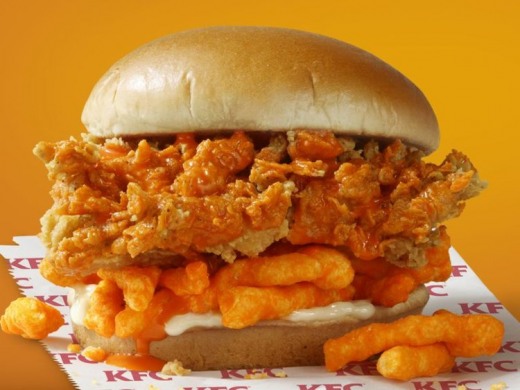