He also now sports a laser that is hot enough to ignite a match or pop a balloon.

This is a reboot I could get behind, especially if they could still get Ringo Starr to come back as the conductor (RIP George Carlin).

This post apocalyptic take on the famously (and creepy smiling) locomotive has not only traded in his wheels for a set of robotic legs, but he also now sports a laser that is hot enough to ignite a match or pop a balloon.

He comes to us from Japanese sculptor, Y Nakajima, who was even kind enough to create a backstory for this nightmarish (yet admittedly awesome creation). 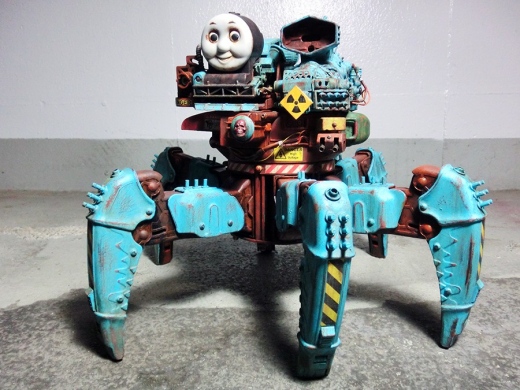 “In an apocalyptic war Sir Topham Hatt, the manager of the North Western Railway, loses everything he has. In a state of misery-induced madness he goes to work on Thomas, an AI-equipped tank engine. When Thomas emerges from the mad scientist’s lab he’s no longer that cheerful and lovable tank engine we all know. He’s become a ruthless killing machine.”