…spending her nights covered in $1,000 a bottle skin cream and packed in a plastic body suit. 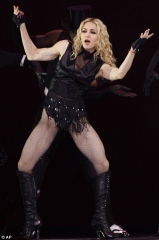 As you’ve probably already heard, Madonna is getting divorced. That means its time for all the secret stories of the House of M to start hitting papers.

She’s fighting a war against time and apparently she’ll try just about any bizarre food habit, exercise or surgical tool she can find. Word is that her obsessiveness to control her age is one of the factors that killed the romance between her and Guy Richie.

After all, it’s hard to keep things hot in the bedroom when your spouse is allegedly spending her nights covered in $1,000 a bottle skin cream and packed in a plastic body suit.

her food habits were so strict that she: “she chose the precise blend of Colombian coffee and tutted over the exact provenance of air-freighted Canadian blueberries.”

She also would not allow TV, newspapers, or any of Guy’s London friends to come over.

Meat was only very occasionally allowed in the house. The only exception to this was at their country estate, Ashcombe House, in Wiltshire, where Guy was allowed to serve a full breakfast to shooting parties – even including such fat filled items as steak-and-kidney pie.

“Madonna thought this kind of food so foul that she would leave the room in disgust when it arrived and sip reproachfully at her bowl of Japanese miso soup.”

Other items banned from the home included: sugar, cheese, cream, salt and preservatives.

Romantic dinners out between the two would usually consist of Madonna sipping water because she didn’t trust the kitchen and a discussion on either the kabbalah, or George Bush.

Beyond the food, she’d never work out for less than two hours a day and even went to the gym the day that kid she bought from Malawi, for some beads and a pair of Levis, arrived in the mail.

So was it all worth it? She’s 50 and looks like she could kick my ass, but Guy Richie doesn’t even want to grab hers anymore. This is what happens when an ego goes unchecked for twenty years.