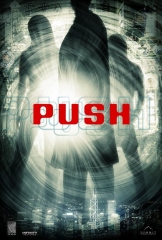 ”Push”, The new sci-fi thriller that looks like a combination Heroes/ X-Men clone, just released their first full trailer. The film, which stars Chris Evans and Dakota Fanning, won’t be in theaters till next February, but its already starting to get a whole lot of buzz.

Synopsis:
The action packed sci-fi thriller involves a group of young American ex-pats with telekinetic and clairvoyant abilities, hiding from a clandestine U.S. government agency. They must utilize their different talents and band together for a final job enabling them to escape the agency forever.