Megan Fox: No Nude Scenes Or Sex Tape Will Ever Happen

“Literally all I have left are my private parts and I don’t want to also share them with the world.” 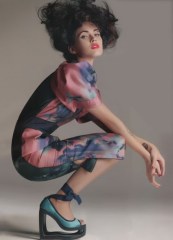 In an interview with MTV News, the 23-year-old actress and American’s current obsession adamantly promised that she will never do any nude scenes or be involved in a sex tape scandal.

Exclaiming that, “It would take one shot of me not looking good and I would not be able to have sex ever again, because I would always just see myself looking like a hippo having sex.”

Fans hoping to one day see the feisty Fox strip down and bare all shouldn’t stop dreaming of the impossible as well.

“People take everything from you when you’re in this business. Your anonymity is stripped from you,” she states. “They invade every part of your personal life, your relationships. Everything you say gets judged, everything you do gets judged.”

“Literally all I have left are my private parts and I don’t want to also share them with the world. I’d like to keep them private. That’s why they’re called that!”