I expect that we’ll be seeing a Cheeto’s spice latte at Starbucks before too long.

Aren’t food trends fun. They start off interesting and unique, and then you can watch as the food industry quickly beats it like a dead horse till the idea suffers from over saturation and general lameness. To put it is simpler terms, I expect that we’ll be seeing a Cheeto’s spice latte at Starbucks before too long.

Following in the footsteps of Burger King’s Mac & Cheetos, Taco Bell has just announced their very own Cheetos Stuffed Burrito. If you live in the Cincinnati area, you’ll be lucky (?) enough to get to try one sometime later this month when they begin test marketing it. 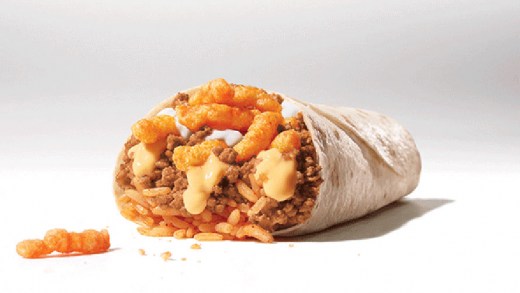