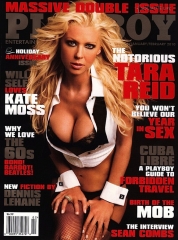 Tara Reid who hasn’t acted in a decade will be appearing nude in an upcoming January/February double issue of Playboy because she wants to show the world that her botched plastic surgery is now fixed.

“I got it fixed and now I’m OK and I want people to know I’m OK,” the 34-year-old and always classy actress explains who is best known for her role in “American Pie” and botched breast implants and stomach liposuction.

“I’ve had it done for the last five or six years, but people only want to show the old pictures. It’s so unfair. That’s part of the reason why I did Playboy, to show people, ‘Right, look at me. This is how I look now.'”

Reid adds that she does not regret what she has done in the past, “I wouldn’t change anything that’s brought me here.

“I’ve grown up a lot, and it’s time for people to see who I am. I lived a lot of years in the public eye. But if you look at me now, that’s not who I am anymore.

“I’m relaxed. I’m a young woman with confidence. At the end of the day, I go to sleep knowing who I am. I’m happy with my life now, and I’d like to keep it this way.

“I’ve been offered Playboy in the past but I didn’t really think it was the right time. I was younger and I’m in my 30s now and I feel I’m at the best age in my life – mentally, physically and spiritually – and I’m proud of it.

“So many unbelievable stars have done it throughout the years and I figured, ‘Why not?'”