Diablo III, I have a new God

I am writing you today just in case you don’t hear from me for the next couple of weeks…or months. The reason why I’ve gone MIA is because…..I’m playing Diablo III. 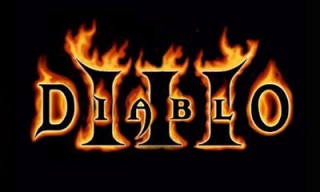 Dear all you readers of The Bonnified Truth,

I am writing you today just in case you don’t hear from me for the next couple of weeks…or months.

I’m writing this because I don’t want you to worry about me, call the cops or the National Guard because you have not heard a peep coming from me. Do not worry. All is well. The reason why I’ve gone MIA is because…..I’m playing Diablo III.

That’s right. I’ve been waiting for this game since I finished Diablo II. I’ve been salivating over it since hints of its release came out years ago WITH NO GAME!!! God, what a tease….

And now….now….come midnight, I will once again be beating demon spawn into a pulp. I cannot wait. Despite the epic tease by Blizzard a few years ago, I am happy they waited until now to release it. I’d rather have an awesome game that took longer to release than a mediocre game that makes me howl in disgust and clamoring for my money back.

So what kind of characters will I play? I’m partial to the spell casters. My character bank is always full of female characters because they’re just prettier to look at. I mean, come on. I’m going to be staring at a bunch of ugly ass demons so I might as well have something nice to look at when I’m playing, right? Besides, the girl outfits are just more awesome.

I’m looking to create 2, possibly 3 characters. I’m going to definitely play as a Wizard and Witch Doctor. The third? Maybe the Demon Hunter. I’m not a melee player. I’m definitely all for range and raining destruction upon your heads!!!! 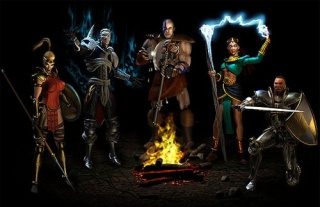 The Witch Doctor reminds me of the Necromancer which is why I like this class. I like the thought of being able to reanimate the dead and make them go BOOM!!!!

I like the Wizard class because I like to cast spells. They’re just so pretty to watch as they rain disaster and pain on my foes. Maybe this is a remnant of when I used to play FF and other RPGs.

The Demon Hunter….meh….not bad. Haven’t quite made up my mind about this class yet.

The Monk – I’ve never been much of a Paladin-ish kind of girl. I’m a healer in real life. I don’t feel the need to be one while playing games, you know? While I see the importance of having at least one Paladin / Monk in a group, I’d rather not be that person.

The Warrior – yeah….I’ve more of a behind-the-scenes kind of girl. Anyone ever read Dragonlance? Remember the twin brothers, Raistlin and Caramon Majere? I’ve always been more of a Raistlin fan than Caramon. That’s kind of why I’ve never really played the Barbarian characters. It’s just not for me. I’m less brute strength, more finesse.

I’ve been obsessively staring at the clock, willing it to count down to midnight. I have a horrible cold complete with nuclear waste green snot clogging up my nose BUT NO MATTER!!!! That’s why coffee was invented and Sudafed.

Come midnight…I’ll be logged on and playing. I can’t wait!!

Added bonus? I get to play with Clyde. First time ever RPGing as husband and wife. This is so awesome. I can’t wait!!! I will be singing “Don’t mess with my man” if some gross slimy thing decides to get fresh with him and I shove a white hot bolt of lightning down their skull or sick a pack of zombie dogs on it. That’s how I roll.

So please don’t worry if you don’t hear from me. I promise to resurface periodically.

If you read my latest post, you’ll know that I said I’d be MIA because I’d be surgically attached to my laptop playing Diablo 3.

What the fuck. I can’t log in. Oh, that’s right. Everyone and possibly their mothers are trying to play. Silly me.

I did, however, manage to get to the screen where I can try to create my character.

I still can’t log on. It must be because of all the urgent server maintenance @#%.

FINALLY!!!! FINALLY, I CAN PLAAAAAAYYYYY!!!!

Once I deleted the 50 million Witch Doctors I attempted to create at midnight, it was game on.

I like how the game plays. It’s pretty fluid and, when it’s working right, flows pretty well. The character movements aren’t choppy and sloppy. I also like the little movie clips between each act and in the beginning that’s specific to the character you picked.

The graphics are also pretty awesome.

The story is good (so far), it’s pretty easy to play once I acclimated myself to the shortcuts and I was leveling demon baddies in no time!!

There were a few glitches here and there but I guess that’s to be expected. I mean, there are hordes and hordes of people like me foaming at the mouth to play this game and they’re all trying to log on.

You know, here’s my beef with Blizzard. Why did they think it’s a good idea to make us LOG ON TO BATTLE.NET’S SERVERS to play a SINGLE PLAYER GAME?!

What was wrong with letting us play offline like Diablo 2? Was there a really good reason to make us clog their servers if we just wanted to play alone and not with others? Did they NOT think this was going to happen? Didn’t they realize that when they had that secret beta release a little while ago? Or did they just assume that we’d all patiently wait in line to log on and play?

I understand if we’re playing multiplayer games. I get it. But I’m not playing with others. I just want to pass the game on my own!

For a game that cost me $59.99 to play, I am getting pretty mad. If this was how Blizzard was planning on reviving their sales, this is NOT how you do it. You don’t piss off the people who pre-ordered your game only to NOT BE ABLE TO PLAY IT! What was the point of pre-ordering it then? To have the satisfaction of knowing I CAN’T PLAY IT?!

If I wanted that, I would either :

1. Not buy the game, period.
2. Wait till a few months later to buy the game so that the initial craziness dies down.
3. Wait to borrow it from a friend after they’re done.

I’m not happy. I want to play the freaking game I paid for. Bonnie Smash.

Bonnie N. Clyde is a writer for YouBentMyWookie.com and the alias of the Supreme Commander / Ultimate Destroyer. When she isn’t playing Diablo III or in the bathroom with a laptop playing Diablo III, she writes in her blog over at MissBonnified.com