Linda Le Gets Up Close And Personal With Pedobear!

Linda Le (AKA VampyBitme) takes a closer look at Catch Kuma’s Pedobear hat and the internet meme that inspired him. 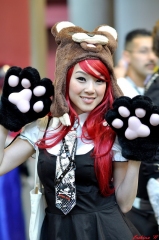 Being hunted down at various conventions by a Pedobear might come across as a typical outing for both girls and boys alike. Well actually, young girls and boys especially. I remember vaguely mistaking Pedobear as Kuma from the long running anime/manga One Piece. Until one fateful day I posted the picture and was told I was a little old for Pedobear’s liking. Being in my early 20’s at the time, I’d think to myself, “Hey! I’m not THAT old right?” And really, I was, because that bear was not Kuma, it was PEDOBEAR!

So I did a little research on this cute internet meme. Pedobear actually surfaced and was created in internet web photoshopping of pictures of young boys and girls, being chased by this cute character. Threads on 4chan where he was seen took flight to Pedobear’s persona, the Pedophile bear. Quite a disturbing but hilarious take on something so wrong. Usually Pedobear’s images pop up when people are being creepy about a child by making adverse comments about them in threads. So with that said, I recently received in the mail much to my delight an awesome PEDOBEAR hat! *^___^* Besides being insanely cute, this hat is really soft and well made! I took some pictures of it on.

This Pedobear hat is made by the sweet folks of Catch Kuma, a new company which takes internet memes and produces awesomeness out of them, like this hat! Yay, now I can chase the young boys at the conventions! :D

Don’t forget, there’s still time to enter to win one of three Pedobear Hats that Youbentmywookie.com is giving away in conjunction with Catch Kuma. CLICK HERE TO ENTER 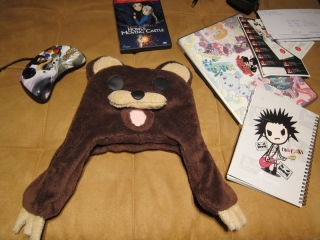 *Show your support for Linda Le and her new shop You can buy her first new creation from her collaboration with Kusopop RIGHT HERE.