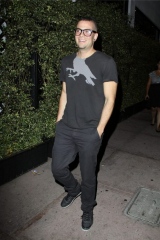 So we all know what happened the last time I went to a Xomad party. I had fun….once I got there. I could rehash everything and go into detail again but that just takes way too much energy and, from what I saw last night, a one time glitch. I’ll be completely honest. I was a little apprehensive about going to the Beso event because I wasn’t really sure what I’d be walking into but it was definitely not what I had expected.

First of all, VALET PARKING!!! This means I know exactly how I’m getting home. Sweet! I heard Mark Salling was going to be there too. * drool *

You don’t understand. Mark’s character as Puck is like….beyond awesome. Puck is hot, a whole lotta naughty, business minded (can we say “Oooh, pool boy?” from Season One? I can), has a body that will not quit, can sing like a motherf*&#@ and makes mohawks look good. In other words, he’s the perfect eye candy. If William McKinely High School was real and I was a student there, I would be so in lust with Puck. But I know we could never be happy together. He’s definitely not boyfriend material.

What was I talking about? Oh yeah.

Xomad had a little get together at Eva Longoria-Parker’s Beso restaurant last night. What a gorgeous gem of a restaurant! I walked in and was stunned. If Beso means “kiss”, then this place is the perfect place to do a whole lot of that. It’s intimate, romantic and very sensual. It’s also perfect for a kiss-and-make-up session but I’ll get into that later. Fyi, there was no literal kissing involved so there’s no need to run and tell Clyde that I was being a bad girlfriend, mmkaythxbye.

He is so nice (I’m not sure why I didn’t think he would be.

Maybe because Puck’s a little bit of an asshole and for some reason, I forgot he’s just a character and not like, you know, REAL?) and very gracious even when I couldn’t shut up about how much I love Puck and omg, he’s even handsomer in person. * squeal *

Yup…waaay to keep it cool, Bonnie.

When he talks to you, you feel like he sees no one but you because you’re the only person that matters. In fact, when he’s looking at you and talking with you, he has the power to make everyone else just *poof* disappear.

Now it’s just you and Mark. Time slows to a crawl. You have to literally launch a full scale assault against the hypnotic pull of those chocolate brown eyes. I’m pretty sure I was babbling but I don’t remember what I was saying. I just remembered it made him laugh. He has nice teeth, btw. I’m pretty sure he was talking to me too but I don’t know what he was saying because I was too busy staring at his lips to pay attention. I did, however, make sure to examine his shirt very closely just to confirm the following :

– yes, the man works out. I know because I touched his shoulder and it’s rock hard. Don’t hate.

– yes, the shirt was very well constructed and was in no apparent and imminent danger of spontaneously falling off his body. 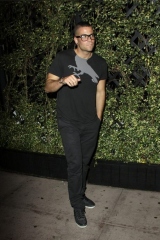 I, personally, don’t like those retro 80’s style glasses gracing the faces of waay too many people but I really liked it on Mark. Maybe it’s because it allowed me to see myself the way he saw me – totally and completely in fan girl mode. * sigh *

And then he had to be whisked away but not before I snagged a blurry picture with him and he high fived me. Yes, that’s right. PUCK HIGH FIVED ME!!!! Don’t be jealous. Green is not a good color on anybody unless you’re a leprechaun.

The drinks were absolutely delicious. Again, the blackberry theme was in full effect at the bar and can I just say deviously awesome that is? With every sip of my Blackberry Collins, I got a mouthful of freshly muddled berries which means I’m TOTALLY doing something good me because there’s real fruit in my drink! Pardon me as I slurped myself into the Land Of The Delusional. The bar was well stocked and well organized.

I even got to taste the food! Beso served up some tender, flavorful steak tacos in a very pretty tortilla envelope thingy. I can’t describe it but I felt like I was getting a special delivery when I plucked one off the serving tray. The pizzas were absolutely yummy too. I would definitely come back here for dinner and drinks.

This would not be complete if I didn’t get to talk about MY BEST FRIEND, G!!! Yeah, remember him? I know I do! And for damn sure he will never forget me now. Ahahahaha!!! He was the first person I ran into when I was making my way into the Kiss Lounge. He also read my write up about the party. Hm….wasn’t expecting that. He even remembered and quoted pieces from it! Wow!!! Jeezus. Definitely wasn’t expecting that. Anyway, we talked a bit and he explained what happened the last time. He apologized and we started over on a new page. Aaawww….warm and happy feelings for all!

I met a few of members of the Xomad team who really took the time to explain what had happened during the last event. Wow. I hadn’t really expected that. Their team really went above and beyond my expectations when they reached out and apologized to us over the phone but I hadn’t anticipated such one-on-one face time with G and his partner, B. They sat me down (in G’s case, literally) and meticulously explained their vision and how they’ve learned to avoid future problems.

This is why, boys and girls, honesty is the best policy. I have to say, I am definitely warming up to Xomad. As honest as I am, so are they. Don’t believe me? Check out their About Us page. Tell me that is not awesomely and brutally honest but this is where Xomad shines. They’re very good at getting together a seemingly eclectic group of people, throw them all together in one place, shake them up with delicious libations, tease them with delectable morsels (Barney the Tapeworm was very happy) and ta da! New friends are made (MatthewLush, you are hilarious. I’m so going to look up that Bieber dance) and Gleek fantasies fulfilled.

Last night’s intimate get together was sheer awesomeness. I’m not just saying that because Mark Salling aka PUCK and I high fived each other. * insert glass shattering fan girl scream here *

Xomad is keeping details of their next party under wraps for now but you can bet I’ll be there for their next event in October.

Bonnie N. Clyde is a writer for YouBentMyWookie.com and the alias of the Supreme Commander / Ultimate Destroyer. When she not lusting over Mark, hugging it out and being BBF with Xomad, she writes in her blog over at MissBonnified.com.