It’s an end to an era. Tupac is gone and Biggie is off searching for more Benjamins up in the sky. Snoop Dogg is “thisclose” to having his Gangsta card revoked for collaborating with teeny boppers… and Nate D-O-double-G passed away. 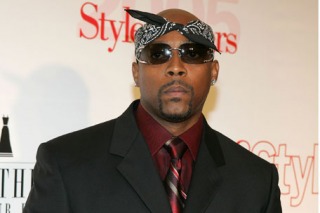 Regulators
We regulate any stealing of his property
And we damn good too
But you can’t beat any geek off the street,
Gotta be handy with the steel
If you know what I mean, earn your keep
Regulators! Mount up!

It’s an end to an era. Tupac is gone (or is he?) and Biggie is off searching for more Benjamins up in the sky. Snoop Dogg is thisclose to having his Gangsta card revoked for collaborating with teeny boppers…and Nate D-O-double-G passed away.

It was a clear black night, a clear white moon
Warren G was on the streets, trying to consume
Some skirts for the eve, so I can get some funk
Just rollin’ in my ride, chillin’ all alone
Just hit the Eastside of the LBC
On a mission trying to find Mr. Warren G.
Seen a car full of girls ain’t no need to tweak
All you skirts know what’s up with 213

Nate Dogg wasn’t just the smooth voice on gangster rap. This is the music I grew up to and cut my teeth on. I was swiping the keys to my mom’s car and going for epic joyrides. I remember the insane hills in Kaimuki. I went too fast and caught some serious air before crashing back down. FYI, a Toyota Previa might resemble a weird egg shaped UFO but it was not meant to be launched in the air.

It is truly a wonder my mom’s car and I both survived. I was also greasing the hinges of our doors with WD-40 because I was grounded. Nothing a little lube couldn’t fix…and PRESTO! I was gone. God truly loves the idiots. I think it’s because I provide so much entertainment.

Songs featuring Nate Dogg were probably playing the day I learned how to drive stick shift. My girl Jami borrowed her sister’s 1992 Honda Civic DX. It was red. She made it sound so easy. “Just step on the clutch, Bon Bon, and let it out slow while you give it some gas! Pau! Easy!”

She also parked the car smack in the middle of the steepest mountain I’ve ever seen. I’m not kidding when I say the incline was about 45 degrees. I rolled backwards and took out about 4 metal trash cans before the curb forced me into a dead stop. I burned out the clutch too many times to count BUT, by the end of the night, I learned how to drive stick. We were also still alive. Those trash cans, however…..RIP, trash cans.

I’m gettin’ jacked, I’m breakin’ myself
I can’t believe they taking Warren’s wealth
They took my rings, they took my Rolex
I looked at the brotha said “Damn, what’s next?”
They got my homey hemmed up and they all around
Ain’t none of them seeing if they going straight pound for pound
I gotta come up real quick before they start to clown
I best pull out my strap and lay them busters down

These were days when I cut class (kids, this is not a good idea. Stay in school) and spent all day in the pool halls. Everyone had pagers. I remember mine was that opaque white with green buttons that would glow in the dark. Voicemail had just come out and my intro made me sound like the missing Asian female member of Bone Thugs In Harmony.

They got guns to my head
I think I’m going down
I can’t believe this happenin’ in my own town
If I had wings I could fly
[ From: http://www.elyrics.net/read/w/warren-g-lyrics/regulators-lyrics.html ]
Let me contemplate
I glanced in the cut and I see my homey Nate
Sixteen in the clip and one in the hole
Nate Dogg is about to make some bodies turn cold
Now they droppin’ and yellin’
It’s a tad bit late
Nate Dogg and Warren G had to regulate

My hair hung down to my butt and was stick straight. My pants were baggy and always in danger of falling off. My shirts could barely be qualified to be called “a shirt” since they barely covered anything.

My shoes were platform clogs and at least 5 inches high. This pushed me to over 6 feet tall.

Makeup consisted of thick, black eyeliner and dark lipliner. A quick spritz of Gap’s “Dream” was my signature scent back in the day.

My car was a 1999 Honda Civic EX coupe in Silver. My car of choice was the 1994 Mazda RX7 but my dad said no. I was so sad. I had plans to trick my Civic out. However, my practical side couldn’t justify spending that much money on parts, rims and new tires when I’d most likely want to change it up some more after a few months. In the end, I settled for super dark tint and obnoxiously bright PIAs. I miss that car. I still have its plate numbers memorized.

My days consisted of going to work (which was at a pool hall) and dragging my ass to class. If I wasn’t at the pool halls working or playing a few games, then I was at the clubs with my friend, Mele. We actually had a schedule for which club we would hit and on what day. House parties were frequent and so were the hotel parties. There was never any Charlie Sheen debauchery going on. We were all still kids just having a good time.

Looking back, I have no idea how we managed to keep that up AND go to class. Good God….

Just like I thought
They were in the same spot
In need of some desperate help
The Nate Dogg and the G-child
Were in need of something else
One of them dames was sexy as hell
I said “Oh I like your size.”
She said “My car’s broke down
And you seem real nice, would ya let me ride?”
I got a car full of girls and it’s going real swell
The next stop is the Eastside Motel

Cell phones were just coming out. I was the first out of my friends to have one. It was an Erikson. That was when the incoming minute was free. I would always yell “MY.PHONE.JUST.BEEPED.CALL.ME.RIGHT.BACK.BYE!” and hang up. It wasn’t unusual for me to find my bill for the month was over $300. * sigh * You can’t just hang up on your girlfriend when she’s crying because her boyfriend was being a royal dickhead, you know? That’s just not what friends do, insane cell phone bills be damned. Voicestream was my carrier back then. I can’t remember my pager number but I still have that cell phone number memorized. Funny what sticks with you even after all these years.

I was always on IRC. #studio-b was where you would find me as Caligirl. If I wasn’t there, I would be on Asian Ave. There is no way I’m giving out that username. Every now and then, someone I barely know would tell me they remember seeing my profile. That was always kind of weird.

i aLsO uSeD tO tYpE LyKe DiS aT wArP SpEeD. mY sPeLLiNg aNd gRaMmAr WuZnT eXaCtLy gR8 EiThEr. ….God, just looking at that makes my eyes hurt. Why did I think that was awesome back in the day? @}–}– were also so cute to me back in the chatrooms.

Angelcity and Geocities were where my pages were housed. Geocities is now part of the great URL in the sky and for that, I’m sad. Angelcities is still around but I can’t remember my address. I do remember a crazy amount of blobbies.

Nate Dogg, your velvety vocals will be missed. You were part of the soundtrack to some of the most nostalgic years in my life. With you in the background, I grew up. You might not be walking with us anymore but you will always be a part of my memories. I’m gonna pour some Henney XO for you. R.I.P.