Miley Cyrus at the VMAs. What the holy f***, Batman. It’s official, Hanna Montana is dead. 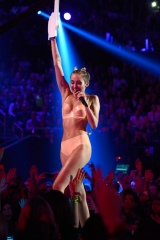 I know I’ve been MIA. Running a small toy company can do that to you (shameless plug to please vote for my company on the Martha Stewart “American Made” contest). However, something happened the other day and I have to add my two cents.

Miley Cyrus at the VMAs. What the holy f***, Batman.

I get it. I really do. You want to shed your “good girl” Disney image. You no longer want to be fresh faced, wholesome or anything along those lines.

So what better way to shed that horrific, shameful past that made you buttloads of cash, a household staple in the homes of tons of people and gave you a name other than “I’m the daughter of that “Achy Breaky Heart” guy by mighty morphing into the craziest, skankiest female you can, right?

We all know that going full on Dirty Girl mode will always erase people’s past memories of you. …..sure…..mmmm hmmm…..

Or is it that they think you completely lost your mind? Or that you’re trying too hard? I forget but I do know one thing. When you’re obviously trying so hard to be something, it’s obvious you’re not whatever it is you so desperately want people to believe you are. 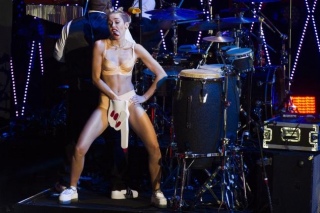 My Facebook feed has been going nuts. My friends who have young children are concerned. One comment stuck with me. This friend said that if Miley Cyrus was a go-go dancer instead of Hanna Montana, no one would judge her. People are talking about it because she’s Hanna Montana and that’s what makes it so disturbing.

That is partially true.

Part of the reason why I can understand people (especially parents) are upset is because she still has such a huge influence over impressionable, young girls. These young minds might see what she’s doing on stage, see all the attention she’s getting and decide that what’s good enough for Hanna Montana is good enough for them.

I’m talking about shaking her ass in anyone’s face / crotch, grinding up on that poor foam finger like she has an itch up her va-jay-jay that only a long, foam, finger with red nails could reach. On a side note, judging by the way it was energetically showing itself and/or flopping around, it also looked like her tongue finally won its independence from her control.

They’ll start twerking in the halls of their elementary school, grinding up on the boys, motor boating the other girls’ butts, substituting their rulers for that foam finger….who knows what’ll happen!

Go-go dancers, by trade, dress in highly provocative outfits and do the sexy dance….but they do it in NIGHT CLUBS or LOUNGES. Basically, they entertain ADULTS who are of age to enter certain establishments – read : where children are not allowed to go and/or have access to.

Miley Cyrus is an “artist” and I’m using that word lightly here. I get that there are some more controversial artists out there, like when Lady Gaga wore a dress made of meat or when she wore a butt floss thong onstage at the same VMA show.

But Miley Cyrus isn’t making a fashion or political statement with her choice of clothing (or lack thereof). She’s trying too hard with this “I’m down and I’m hood” attitude because she wants the world to see that she’s killed her Hanna Montana past. Twerking, shoving a set of grills in your mouth don’t make you “hood”. Randomly slapping black women on the ass doesn’t make you “hood”. It makes you look like a wannabe. 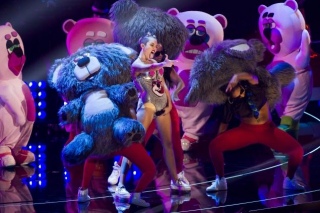 That brings me to my next topic. What was she wearing? I’m no fashionista. I have no idea what the hot color of the season is or what the “must have” shoe is.

But I do know that what she wore was not very flattering.

Did no one also think that weird, grey, mouse leotard thing she wore OVER the flesh colored plastic undies kind of looked kind of familiar? I thought it looked like she went to hunt down Chuck E. Cheese, (an icon for many children), killed him in an effort to further crush the trappings of childhood, skinned his carcass and paraded around in his skin onstage.

And who wears booty shorts UNDER a leotard anyway? Wouldn’t that just make your crotch extra sweaty and gross? Minus 50 million points for the booty shorts being made of what looks like plastic in terms of breathability for your lady parts.

I’m not going to get into how her flesh toned, two piece outfit did not fit her well (anyone remember that photo circulating online that compared her butt to a chicken butt?) because I don’t want anyone to have a bad body image of themselves. What I will say is you should dress in clothes that flatter your body shape, no matter what shape you have. Celebrate your body. For Heaven’s sake, don’t punish it.

First of all, what is up with the giant teddy bears strapped on to the dancers? She must’ve paid them TONS of money to them to agree to frolic around the stage piggy-backing some giant stuffed bears.

Did no one think this was like kind of like Marilyn Manson’s use of creepy, giant bears in his “Tainted Love” video?

Second, who still wears grills? Miley, I’m looking at you and your latest video. Katy Perry, also looking at you. Madonna….I don’t even know what to say to you.

Third, twerking is not easy. It takes skill and coordination. However, a flat, bony butt does not a good twerk make. Just sayin.

Bonnie N. Clyde is a writer for YouBentMyWookie.com and the alias of the Supreme Commander / Ultimate Destroyer. When she isn’t slave driving magical elves into producing cute plushy toys, she writes in her blog over at MissBonnified.com