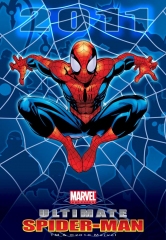 Soto has been credited at Nickelodeon and Cartoon Network where he’s directed numerous episodes of “Teen Titans” and, more recently, “Ben 10.” Currently he is doing storyboard work on “Kung Fu Panda: Legends of Awesomeness” which will debut later this year on Nickelodeon.

Marvel announced plans for “Ultimate Spider-Man” back in April. The new series is set to debut on Disney XD in Fall 2011.

“Ultimate Spider-Man will be a unique journey exploring our favorite web-slinger as he teams up with other fan favorite Marvel Super Heroes in never before seen stories with a new life filled with great challenges, new friends, intense action and character growth,” said Eric S. Rollman, President of Marvel Animation.

Along with his new powers, the challenge for the young web-slinger in the new series is balancing his relationships with his friends and family and his super colleagues who can help him gain an understanding of his parent’s legacy and his destiny.