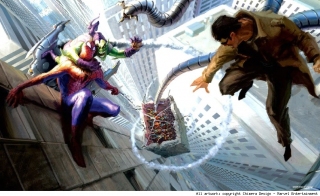 Two years ago the Al Ahli Group announced a partnership with Marvel Entertainment to bring many of Marvel’s speculator characters to Dubai for a new superhero theme park. The character themed park would feature rides and exhibits tailors to the likes of the Marvel (616) universe such as Spider-Man, Iron Man, Hulk, The Fantastic Four, the X-Men, in addition to the rest of the Marvel stable of heroes and villains.

Do we know whether or not this project will continue? Can’t say. But what we do know is that Disney has posted a lot of concept art developed by the Chimera Design Company that showcases a number of different attractions planned for Marvel Dubailand. Some of the rides include a Hulk rampage destruction attraction, being saved by Spider-Man while he battles Dr. Oct, the Fantasticar, Stark Industries, and the X-Men: Danger Room.

The comic book geek in me is gushing yet sadden with the potential and the could have been. Dubai was never a must go destination for tourism (especially when you have kids), but I can now see why having a Marvel theme park there would have been an instant win. Or at least be interesting enough to draw sizable crowds to a land of unrelenting heat.