With Emma Stone watching from the sidelines, Andrew Garfield took time to play a little basketball with some local kids in NYC… While still wearing his Spider-Man Costume.

When making a movie, most big stars retreat to their trailers as soon as the cameras stop rolling. That doesn’t seem to be the case for Andrew Garfield and Emma Stone. The two stars went for a walk between takes of the filming of The Amazing Spider-Man 2, in Chinatown in New York. Emma had her dog in tow and Garfield was still fully clad in his Spider-Man costume. That’s when a couple of kids got the thrill of their life.

Garfield, still in costume, and with Stone standing on the sidelines, took a few minutes to play some basketball with the kids. Even J Jonah Jameson would have to give him some credit for that. 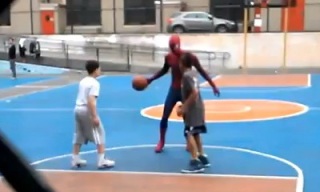