Battlestar Galactica Finale So Awesome, Even Hitler Would Cry

“I don’t think anything could prepare you guys for what happens at the end. We weren’t prepared,” 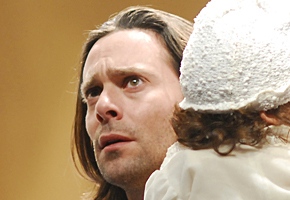 Everyone is getting stoked about the final ten episodes of Battlestar Galactica that will begin airing in January on Sci-Fi. James Callis, the man who plays Gaius Baltar had a chat with the folks over at the LA Times. Here’s a little bit of what he said about the finale.

“I don’t think anything could prepare you guys for what happens at the end. We weren’t prepared,” he said. “It’s quite — do we use the phrase “space opera”? There is something operatic about the ending of the show, only in the sense that it’s like a full orchestra. Imagine very single person in the cast represents an instrument, and you’ve heard their theme or fugue. And then all the instruments play together. Everybody involved in this thing together — it’s like the ‘1812 Overture.’ Not only have you got all of the violins and the flutes, you’ve also got the flipping cannons they brought off Napoleon’s ship, blowing off the roof. It’s going off with a bang, this thing.”

“Honestly you can’t be disappointed,” he said. “I think if Adolf Hitler were back, he’d be crying in his handkerchief.”