Will Berenice Marlohe make a good Bond Girl? Well, she can’t be worse than Madonna.

There’s been a lot of speculation on who will be playing 007 in the next James Bond film. It looks like the decision is probably down to Daniel Craig or Idris Elba. Luckily, one question about the next Bond film has finally been answered… who is the next Bond Girl?

The Bond Girl role has been filled by everyone from Tanya Roberts to Halle Berry… and sadly, Madonna. This time it looks like they will be going back to a slightly lesser known actress to fill the spot in Sam Mendes’ 23rd 007 movie. Her name is Berenice Marlohe and if the image below is any indication, we will be seeing a lot more of her in the future.

Marlohe is a French actress who has had success in TV and is now transitioning to film. She’s currently filming Un bonheur n’arrive jamais seul with Director James Huth. 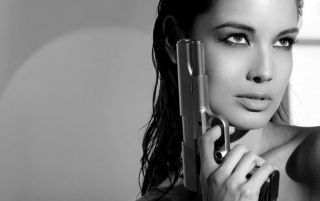