First Official Pics Of The Avengers

Finally, some images from the Avengers set that weren’t taken by a cell phone camera.

We’ve seen tons of paparazzi shots of the on-set action of Marvel’s The Avengers, but today’s Entertainment Weekly finally gives us the first official look of the behind the scenes goings on behind the upcoming blockbuster. Not only do The Avengers grace the cover of the new EW, but you get to see some nice interaction between the team and even with director, Joss Whedon. Check out the pics below and grab the latest issue of EW to see the whole story. 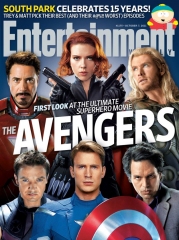