Apparently they weren’t content with all the crap they added to the franchise with the last film. 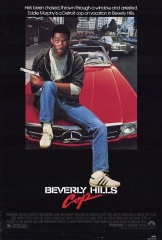 Latino review is a great website that has a knack for getting early copies of scripts for all the big movies. Recently they got a hold of the new Beverly Hills Cop movie and the news isn’t good.

Brett Ratner, the film’s director has decided to not only kill off Judge Reinhold’s Billy Rosewood character, but he’ll be doing it in the first five minutes of the movie. This gives them the easy out of making the movie about finding Billy’s killer.

I’m not sure what the heck he’s thinking. This is a bad idea. Billy Rosewood was one of the most beloved characters in the story and the perfect foil to Eddie Murphy’s Axel Foley.

Here’s what they have to say.

Says the site, “It’s been 15 years since Axel Foley was last in Beverly Hills, and screenwriters Michael Brandt and Derek Haas needed a good reason to bring him back. That reason comes just a couple of pages into the latest script for Beverly Hills Cop IV (which calls itself Beverly Hills Cop 2009) – Judge Reinhold’s Billy Rosewood takes a leap out the 20th story of the Los Angeles Police HQ. When Axel hears that his former partner and best buddy became sidewalk salad he knows it wasn’t a suicide and he flies to Beverly Hills to get all the facts for himself.”

”It turns out that Billy was learning about a group of corrupt LAPD officers who were involved with gun running with a Beverly Hills rich kid who has ties to the military. The mystery isn’t that big a deal, and Axel mostly gets from place to place by half-assedly conning people. He makes up a fake story about who he is and then doesn’t follow through on it. It’s like Brandt and Haas saw the first BHC and just didn’t have the energy to write anything that matched up to it”.

Additionally, the site says that the script is essentially just an action movie – one that casts Murphy as The Terminator.

Apparently they weren’t content with all the crap they added to the franchise with the last film.