Joss Whedon has a rep for bringing tough female characters to the screen, but did you ever wonder about who would win in a fight between Buffy Summers and Natasha Romanov? He does.

Joss Whedon has a rep for bringing tough female characters to the screen, but did you ever wonder about who would win in a fight between Buffy Summers and Natasha Romanov? He does. In fact, the topic came up in a recent interview with USA Today. Amazingly, he not only had an answer for the question, but he pretty much had the entire fight choreographed in his head already. 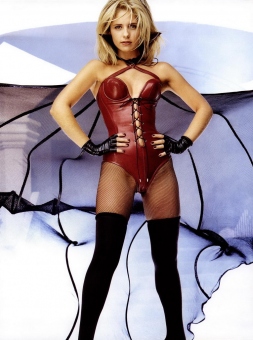 “Buffy would go easy at first, but as soon as Natasha popped her with a Widow Sting, she’d start bringing some slayer brawn to the fray. Natasha’s fast, but a couple of good connects and she’s wobbling, possibly something broken — she whips out her glock and now Buffy’s dodging — right where Natasha wants her. Natasha shoots the cable holding the steel barrels and they tumble onto Buffy, nearly burying her — Buffy just arcs out of the way, grabbing the splintered cable and swinging directly onto Natasha, a bullet grazing her cheek as her feet land hard on the Russian’s shoulders, sending her back flat — crack! — on the floor, Buffy wrenching the gun away and tossing it, fist ready for the final strike. Natasha, struggling to stay conscious, says the fight’s over. Buffy agrees, but Natasha explains: She poisoned Buffy hours ago. That waitress that brought her salad …? Natasha smiles. The poison is dormant — ’til it’s activated by adrenaline. Buffy’s eyes narrow. “Too bad I didn’t use any.” Wham! Natasha’s out for the count, and Buffy’s heading — slowly — to Willow for a mystical cleanse.

“That’d be my first guess.”

I have a scary feeling that Whedon has spent a little more time than he’d like to admit picturing this battle in his head.