Chris Pratt Talks Some More About GUARDIANS OF THE GALAXY

“…it was in the audition. I mean, I knew he had my spirit — I knew that my spirit was right. And I knew it sounded right, I just didn’t look right yet.”

There’s a lot riding on Marvel’s Guardians of the Galaxy, especially after Thor: The Dark World got squeezed out of first place in the box office this week by The Best Man Holiday. Personally, I’m pretty excited about Guardians. Just the fact that James Gunn is directing the film has me ready to buy my ticket.

Chris Pratt, Starlord, is becoming a huge box office draw in his own regard. IN fact, he’s now in talks to star in the new Jurassic Park film. He just sat down with The Huffington Post to talk about the role and the movie and his new movie, Delivery Man starring him and Vince Vaughn. check out highlights below. 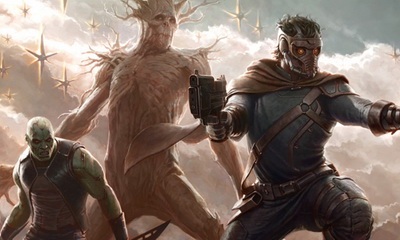 On the audition:
“For me it felt like a perfect fit right off the bat. I felt like at my very first audition that I nailed it, but, I was afraid that I wasn’t physically right for it because I was still pretty big from this movie [“Delivery Man”]. And so I just thought, If they could just believe in me, then I can lose this weight, then I’ll get this role. But I had a feeling it was a little too much weight to expect any person to lose — I was determined at that point. I was like, Well, you know what, if I’m not going to get this, that’s fine. But no one is ever going to tell me that I’m too fat for a role again. I’m going to start getting in shape. So I started getting in shape right away. We wrapped “Delivery Man” right around this time last year — oh my gosh, what a year — and I had gotten heavy, heavy, heavy and I went through the holidays and I continued to gain weight. Then, right at Jan 1st, I started working out. Then around the 15th, this audition came up. So I had lost probably 10 pounds … but I was still around 280 and that’s too big to be a Marvel character. But, it was in the audition. I mean, I knew he had my spirit — I knew that my spirit was right. And I knew it sounded right, I just didn’t look right yet.”

On the Comic Con footage and subsequent fan reaction:
“I really think that’s the movie we made, too. That’s so representative of the movie we made. It’s one of those things: You don’t want to get too excited as an actor-” he says, before explaining that it’s hard to get your hopes up because of the nature of the business, but he thinks what was shown is exactly what he’d hoped the movie would be. When the interviewer talks about the tone of what was shown, which started out serious then revealed a side that they describe as “more lighthearted and funny and weird than what we’ve seen so far from Marvel movies,” Pratt agreed.