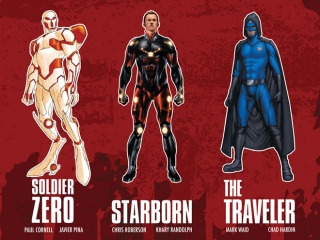 BOOM! Studios and legendary comic book creator Stan Lee have released a public message aimed at comic retailers and fans to give his three new ongoing superhero comic book series launching this fall a try. The three new titles include:

“Soldier Zero,” a living alien weapon and he’s fused with an astronomer from Earth, and he quickly learns how to survive by being hunted by both worlds. Written by Paul Cornell and ships in October.

“The Traveler,” a hero with incredible powers who harbors many secrets of his own past and his future! Written by Mark Waid, it launches in November.

“Starborn,” another hero who discovers he is a prince from an alien empire and the fate of our entire Galaxy hangs on his incredible destiny. Written by newcomer Chris Roberson, it launches in December.

SOLDIER ZERO #1, currently available for Comic Book Retailers to order from Diamond Comic Distributors and Haven Distributors, is written by Paul Cornell (ACTION COMICS) with art by Javier Pina (SUPERMAN) and ships with seven covers, including A & B covers in a 50/50 split by Trevor Hairsine and Dave Johnson respectively, a 1-in-25 incentive by Phil Noto, 1-in-50 Undressed Trevor Hairsine Variant, 1-in-75 Undressed Dave Johnson Variant, 1-in-150 Undressed Phil Noto Variant and a special 1-in-300 Stan Lee signed variant cover with all new cover art by Kalman Andrasofszky. SOLDIER ZERO #1 carries a Diamond Code of AUG1008571 and is shipping this October.THE TRAVELER #1 and STARBORN #1 will be available to order in September and October respectively with THE TRAVELER #1 shipping in November and STARBORN #1 shipping in Decemeber.

Anything for you Stan!