Is anyone surprised that the man behind this also produced Adam Sandler’s JACK AND JILL?

In the climatic battle towards the end of the film, a 50-foot mutant grumpy cat must battle a radioactive piano cat for world supremacy. OK, that probably wouldn’t happen. It would be too awesome for these ass clowns to come up with.

Todd Garner, the man behind Adam Sandler’s Jack and Jill, is behind the effort to turn Tard the cat (AKA Grumpy Cat) into a “Garfield-like” family movie.

“This started off as a picture of a cat, but rare is an image that evokes that much comedy. You read all of the memes and the comments, and one is funnier than the next. We think we can build a big family comedy around this character.” 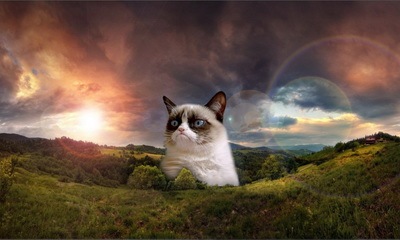