DC Comics announced recently that they will be lowing their price for all standard length 32-page ongoing comic books from $3.99 to $2.99. 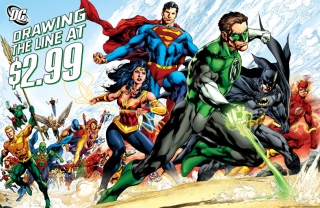 DC Comics announced recently that they will be lowing their price for all standard length 32-page ongoing comic books from $3.99 to $2.99. The announcement comes with a beautiful piece of artwork by Ivan Reis featuring the Justice League and Green Lantern as the front man (for obvious reasons).

It’s a great campaign however it’s a little misleading. What’s left out of the press release is the new “standard length” for 32 page ongoing comic books… which now happens to be two less story pages and two more ad pages. Therefore, while it may appear that DC is lowing their price point by a whole buck, we’re essentially losing two pages of story, equally 10% of what we use to get before at $3.99.

“This announcement reaffirms DC Comics’ commitment to both our core fans and to comic book store retailers,” said Jim Lee, DC Comics Co-Publisher. “For the long term health of the industry, we are willing to take a financial risk so that readers who love our medium do not abandon the art form.”

“As Co-Publishers, we listened to our fans and to our partners in the retail community who told us that a $3.99 price point for 32 pages was too expensive. Fans were becoming increasingly reluctant to sample new titles and long term fans were beginning to abandon titles and characters that they’d collected for years,” said Dan DiDio, DC Comics Co-Publisher. “We needed a progressive pricing strategy that supports our existing business model and, more importantly, allows this creative industry to thrive for years to come. With the exceptions of oversized comic books, like annuals and specials, we are committed to a $2.99 price point.”