It’s no surprise that Marvel has been running tributes to Stan Lee in their comics since the legend’s passing late last year, but no one was really sure if DC was going to do anything to commemorate him. If you picked up any of today’s comic book releases from the publisher, you may have already seen this. Comics including Action Comics, Detective Comics, and Heroes in Crisis all feature a full-page tribute to the comic book creator. In it, they refer to Lee as the “Distinguished Competition”. If that sounds familiar to you, it’s because that is exactly how Stan Lee used to refer to DC comics when he would mention them in the letters pages at the back of Marvel Comics when he was Editor in Chief. Check out the tribute below: 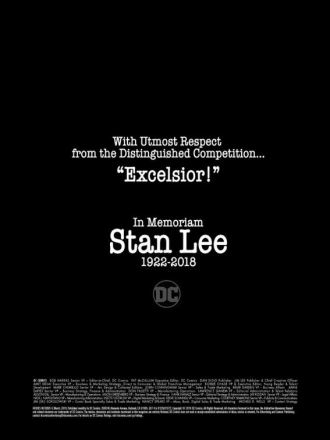