He-Man fans rejoice, The Power of Grayskull is returning with an all new adventure this July in the pages of DC Comics.

He-Man fans rejoice, The Power of Grayskull is returning with an all new adventure this July in the pages of DC Comics. The company that just relaunched their entire universe is now set to try and re-invigorate the license with a six issue mini-series that is going to be written by James Robinson and drawn by Phillip Tan with inks from Ruy Jose.

Here’s the synopsis of the upcoming series:
“The skull faced arch-enemy of He-Man [Skeletor] has figured out a way to rewrite the reality of Eternia, casting himself as the ruler of Castle Grayskull, and our heroes – including He-Man – as regular peasants with no memory of their previous life. And while simple woodsman Adam may dream of wielding a massive sword, and fighting in battles, he thinks they’re just dreams. That is, until a mysterious sorceress approaches him, and sends him on an epic journey to save all of Eternia.”

So…. pretty much ‘Once Upon a Time’ with He-Man instead of the Brothers Grimm? 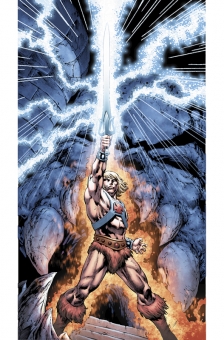