“To ‘white-out’ Sing with a Caucasian face…. is treading on the grave of a true Chinese-Australian hero.” 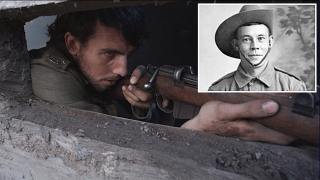 Look like Hollywood isn’t the only one being accused of whitewashing. Fury has recently erupted over a new mini-series about the deadliest sniper at Gallipoli, Chinese-Australian Billy Sing, who is played by a white.

Director Geoff Davis has cast his son Josh in the lead role, while Sing’s Chinese father is played by the veteran actor Tony Bonner, who came to prominence as a blond-haired helicopter pilot in the Skippy TV series.

According to the Australians of Chinese ancestry, this whitewashed portrayal of The Legend of Billy Sing betrays their heritage, robbing them of a rare historic hero.

Sing, who was born in 1886 at Clermont, Queensland, to a Shanghainese father and an English mother, became celebrated as “the Assassin” at Gallipoli, where he had 201 confirmed kills, winning the Distinguished Conduct Medal, second only to the Victoria Cross. His sniping “spotter”, Ion Idriess, later a successful writer, described how the Turks sent their champion sniper “Abdul the Terrible” to hunt him down, but Sing shot Abdul first.

Former Nationals senator Bill O’Chee, who became an army reservist when he left parliament in 1999 and was born to a Chinese father and an Irish-Australian mother, was “deeply disappointed” by the production.

“We’ll now have people growing up thinking Billy Sing was white. But we are jealous of his memory,” he said. Federal Queensland Liberal MP Don Cameron, who found the site of the South Brisbane boarding house where Sing died in 1943 with five shillings on his bedside, said it was “tragically wrong” to have the sniper played by a white.

“It is plain wrong. I congratulate the filmmakers for doing the story, but condemn them for being so careless with the truth.”

Davis however, defends his casting citing problems with casting Sing as a Chinese-Australian because he was unable to find a 60-year-old Chinese actor to play his father.

“Asking Tony to play it as Chinese would not only have been racist and demeaning. It was also financially irrelevant — we could not have afforded the make-up,” he said. “Whatever his genetic background, his culture was Australian. To me, he’s very representative of every Australian whose parents were not born here.

“A lot of people are sitting at the back of this bus attacking the driver. A lot of people feel they own the story of Billy Sing. But they’ve probably got more resources than me — if they want to tell that story, then tell it.”

Davis said his critics misunderstood his intention to “create a fictional story validated by having people perform true deeds, in the tradition of the historical novel”.

The cast comprises largely unknown actors, who will be paid only if the films — a three-part mini-series of 90 minutes each — make money. He had run out of money to complete the series.

“To ‘white-out’ Billy Sing with a Caucasian face is not only a gross historical misrepresentation, it is treading on the grave of a true Chinese-Australian hero,” he said.