While we don’t get to see the actors in this first teaser poster, we do see their bad ass silhouettes.

Willis will play Kane a mercenary while Fox will play the schizophrenic Lynch. As teh story goes, the two meet while being transported to Death Row but are attacked and kidnapped by Kane’s former team along the way. Together, the duo must team up to recover a stolen microchip that may reveal Lynchs’ true identity.

Directed by Simon Crane, filming begins in August. I’m not expecting much from “Kane & Lynch,” especially since it’s based off a video game, but it certainly can’t be worse than “Cop Out.” 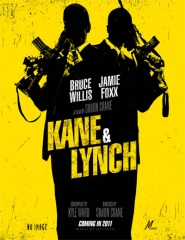