Disney has turned the concept of re-making all of their animated classics from hair-brained scheme into box office gold and one of the next movies on their slate is the Tim Burton directed remake of Dumbo. At this week’s Cinemacon, the studio shared footage with critics and also released this first image of the titular elephant. We also now know a little more about the story, and they’ve definitely made some changes from the original.

In the new film, the story will be centered on a character played by Colin Farrell. He is a former circus star who has just returned home from the war and is having trouble finding his place in the world. He joins back up with Max Medici’s circus (Max is played by Danny DeVito) and becomes the caretaker of Dumbo, a baby elephant who can fly. When news of the flying elephant gets out, V.A. Vandevere (Michael Keaton) and Colette Marchant (Eva Green) Do what they can to take advantage of the situation.

That’s a heck of a cast, and a siurprisingly impressive first image. Here’s hoping that the studio releases a first trailer soon. Dumbo hits theaters on March 29, 2019. 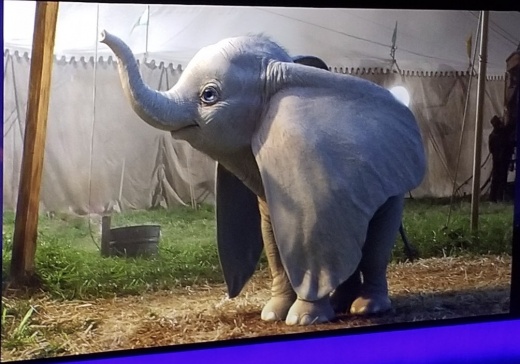