Possibly spoiler at the bottom of the article.

There are not a lot of people out there with as much Star Wars street cred as Drew Struzan. The man is a legend when it comes to his poster art for Star Wars and any number of other classic films from An American Tale to Blade Runner, and even Coming To America.

As you may recall, Struzan’s poster for Star Wars the Force Awakens was unveiled at D23 over the weekend leading to a new fan theory (scroll down to the bottom for that potential spoiler).

Here’s what he told Movie Weekly after the event about how he came to do the poster and what he thinks of the new film.

DREW: Well, see it started about a year ago or more, a year and a half ago. I got a call from J.J. Abrams who I have never met, and he was in England shooting the film and he goes ‘Hi, I’ve always loved the work’ and Blah, Blah, Blah, sounding like you, you know, like a fanboy (laughs). And we were talking along and he just goes ‘…Well, would you?’ and I said ‘…If I was asked.’ And that was the conversation (laughs). By the end of it, there were no other words.

So about a year later, we get together and meet and he says we’re using all the original people – John Williams, Kasdan, Harrison Ford’s in it, everybody’s in it and everybody’s writing and making the music and we have to have your art to make it the real thing. So, of course, I’ve got to do it for George and I’ve got to do it for Star Wars. I’ve never worked with J.J before and so we started working on it and he showed me like half the movie and it was just… a wonderful film and I know it’s going to be grand. I got to read the script and subsequently I’ve seen half of it and I can tell you and the fans this, Honest to god, it is far and away probably going to be THE BEST Star Wars you’ve ever seen. It’s beautifully made and it’s a wonderful story. 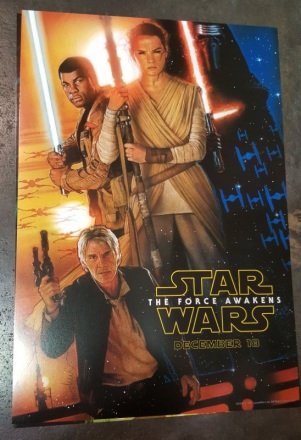 ***POTENTIAL SPOILER
– There’s now a fan theory based on Struzan’s poster and the interview he did after D23. Many people now think that the poster is actually a bit of a family reunion. That would make Finn the illegitimate son of Han Solo and Rey and Kylo Ren the children of Han Solo and Leia Organa. This would actually fall in line with some of the novels that are no longer Canon. In some of those books, one of their kids turned to the dark side. What do you think?