Edward Norton confirms officially that he will not be returning to play the Hulk in Marvel’s “The Avengers.”

Edward Norton confirms officially that he will not be returning to play the Hulk in Marvel’s “The Avengers.”

Via Facebook, Norton issued a response to his fans saying, “It seems it won’t work out for me to continue playing Bruce banner for Marvel in ‘The Avengers.’ I sincerely hoped it could happen and be great for everyone, but it hasn’t turned out as we all hoped.”

Norton’s announcement follows a press release from Marvel last week where the studio said Norton was no longer considered for the role of Bruce Banner/Hulk because they wanted an actor “who embodies the creativity and collaborative spirit of our other talented cast members.”

Essentially fired from the role, Norton’s agent Brian Swardstrom fired back with his own press release criticizing the behavior of Marvel Studios’ president Kevin Feige.

It seems like the two parties are now moving on having accepted Marvel’s decision not to include Norton in arguably one of the most ambitious superhero films to date.

“Hulk is bigger than all of us, that’s why we love him, right?,” says Norton.

Additionally, it’s also being rumored that Joaquin Phoenix may land the role of Hulk, although there’s little truth to this at the moment. 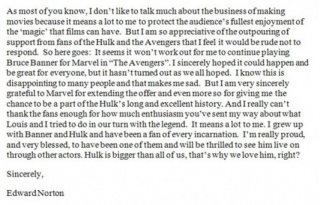