Entourage to “Hug it out” For a 6th Season on HBO

Production on the season six is expected to begin early next year, ensuring the show’s return by summer 2009. 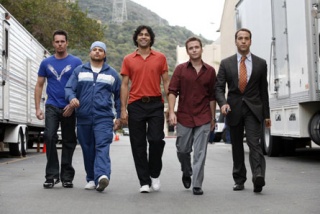 After just five episodes of its fifth season and just a little while after Jeremy Piven’s third Emmy win as douche bag agent, Ari Gold, HBO has given the green light to Entourage for a 6th season.

Unlike the long vacation between seasons four and five, production on the season six is expected to begin early next year, ensuring the show’s return by summer 2009.

“We’re thrilled to be back for another season,” creator Doug Ellin added. “HBO has been amazing in allowing the show to grow and mature. I never imagined when we started that we would make it to six seasons.”