Fantastic New Image of Bilbo Baggins From ‘The Hobbit’!

Just released, here’s a fantastic of Bilbo Baggins (Martin Freeman) with his sword String from Peter Jackson’s “The Hobbit: An Unexpected Journey.”

Just released, here’s a fantastic of Bilbo Baggins (Martin Freeman) with his sword String from Peter Jackson’s “The Hobbit: An Unexpected Journey.” So far, a lot of the images have been pretty lackluster and neutered, but this image changes everything! Without a doubt, this has to be one of the most anticipated movies of 2012.

“The Hobbit: An Unexpected Journey” is hit theaters December 14th, 2012. The second film, “The Hobbit: There and Back Again,” is set for release the following year, on December 13, 2013. Also if you haven’t seen the new trailer, check it out here. 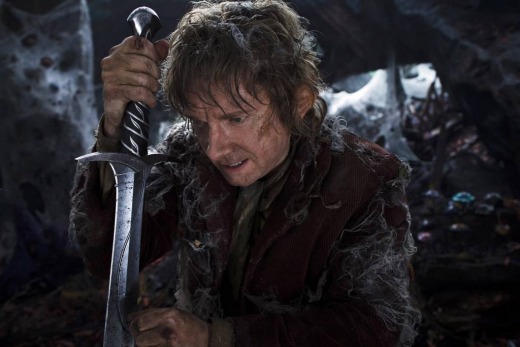 Here’s the official film synopsis:
The adventure follows the journey of title character Bilbo Baggins, who is swept into an epic quest to reclaim the lost Dwarf Kingdom of Erebor from the fearsome dragon Smaug. Approached out of the blue by the wizard Gandalf the Grey, Bilbo finds himself joining a company of thirteen dwarves led by the legendary warrior, Thorin Oakenshield. Their journey will take them into the Wild; through treacherous lands swarming with Goblins and Orcs, deadly Wargs and Giant Spiders, Shapeshifters and Sorcerers.

Although their goal lies to the East and the wastelands of the Lonely Mountain first they must escape the goblin tunnels, where Bilbo meets the creature that will change his life forever…Gollum.

Here, alone with Gollum, on the shores of an underground lake, the unassuming Bilbo Baggins not only discovers depths of guile and courage that surprise even him, he also gains possession of Gollum’s “precious” ring that holds unexpected and useful qualities … A simple, gold ring that is tied to the fate of all Middle-earth in ways Bilbo cannot begin to know.

Ian McKellen returns as Gandalf the Grey, the character he played in The Lord of the Rings trilogy, and Martin Freeman in the central role of Bilbo Baggins. Also reprising their roles from The Lord of the Rings movies are: Cate Blanchett as Galadriel; Ian Holm as the elder Bilbo; Christopher Lee as Saruman; Hugo Weaving as Elrond; Elijah Wood as Frodo; Orlando Bloom as Legolas; and Andy Serkis as Gollum.

The screenplays for both The Hobbit: An Unexpected Journey and The Hobbit: There and Back Again are by Fran Walsh,Philippa Boyens, Guillermo del Toro and Peter Jackson. Jackson is also producing the films, together with Fran Walsh andCarolynne Cunningham. The executive producers are Alan Horn, Ken Kamins, Toby Emmerich and Zane Weiner, with Boyens serving as co-producer.