With just about a month left until the release of JJ Abram’s Star Trek Into Darkness, the final trailer was released earlier today.

With just about a month left until the release of JJ Abram’s Star Trek Into Darkness, the final trailer was released earlier today.

I really enjoyed the last film and I can’t wait to see the new one and learn who Benedict Cumberbatch is playing… my bet is still on Kahn.

Some other sites are mentioning that it has become a bit cliche for the Enterprise to be destroyed. It has already happened at least two other times. To that, I say, shut up! If you don’t get excited watching giant space ships getting blown up, there’s a little part of your soul that might just be dead. 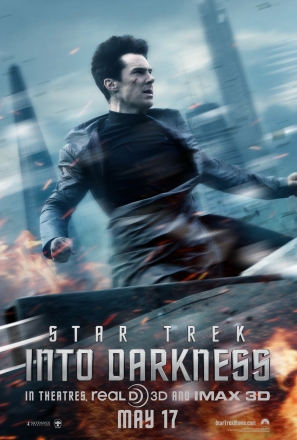 In the wake of a shocking act of terror from within their own organization, the crew of The Enterprise is called back home to Earth. In defiance of regulations and with a personal score to settle, Captain Kirk leads his crew on a manhunt to capture an unstoppable force of destruction and bring those responsible to justice.