Here’s your first look at Daniel Radcliffe post Harry Potter, in the supernatural ghost story “The Woman in Black.”

Here’s your first look at Daniel Radcliffe post Harry Potter, in the supernatural ghost story “The Woman in Black.”

From the image, Radcliffe can be seen in costume on set wearing Victorian-era clothing and surrounded by cameras. This will be Radcliffe’s third non-Potter film, and the first he’s started filming since principle photography on “Harry Potter and the Deathly Hallows” concluded. Radcliffe has also signed on to appear in an upcoming adaptation of “All Quiet On The Western Front.”

Directed by James Watkins and written by Jane Goldman, “The Woman in Black” tells the story of Arthur Kipps, a young lawyer who visits a remote English town to take care of a client’s affairs after their death. However during his stay he becomes witness to the town’s many ghostly secrets.

Filming will continue through December around the United Kingdom. 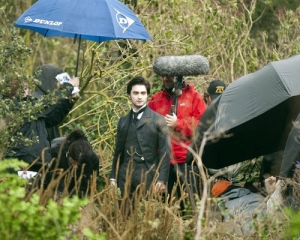