Courtesy of Entertainment Weekly, here’s your first look at Hugo Weaving in full Red Skull makeup as he’ll appear in Marvel Studio’s “Captain America: The First Avenger.” We’ve all seen Weaving prior to his ghastly transformation and we’ve all been teased with shadowy glimpses of the Red Skull, but here’s the official live-action look. 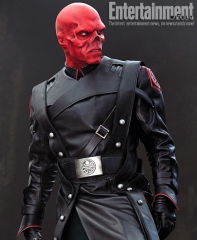