Paramount Pictures and Marvel Entertainment have premiered the first official movie poster for Jon Favreau’s “Iron Man 2” on Yahoo (and thanks to Favreau for the heads up via Twitter). The new poster showcases Iron Man (Robert Downey Jr.) back-to-back with War Machine (Don Cheadle).

With the movie poster debut, a trailer surely isn’t far off. Previously it was hinted by Favreau that we might even see the first official trailer for “Iron Man 2” as soon as the debut of Guy Ritchie’s “Sherlock Holmes,” which drops Christmas Day. Meanwhile “Iron Man 2” will hit theaters May 7, 2010.

Anyway, enough yapping check out the gorgeous full poster below. 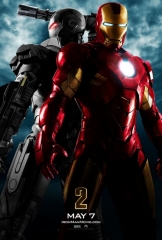