Your first look at the upcoming live-action big screen adaptation of “the classic ’80s cartoon, “Smurf.”

Back in July last year we mentioned that “Scooby-Doo” director Raja Gosnellwill was hired to direct Columbia Pictures’ live-action/animated “Smurfs.” Today we finally have our first look at a CG Smurf and what’d ya know. It doesn’t look half too bad, in fact, it’s adorable!

Courtesy of UGO.com, what we have below is a leaked black-and-white image of a Smurf from the upcoming big-screen adaptation of the classic ’80s cartoon, which is currently in production. While I know it isn’t much, it’s looking 100X better than “Scooby-Doo.” Of course “Casper” also looked great in CG, but then we all know how well that movie ended up being.

“The Smurfs” were originally based off a Belgian comic strip and then later became a poplar Hanna-Barbera cartoon that ran from 1981-1990. “Smurfs” won’t be out until July 29, 2011. 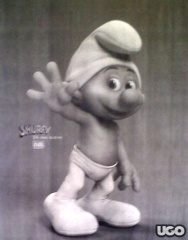