First Look: Check Out The Characters From Tim Burton’s Wonderland

With Johnny Depp, Alan Rickman, Christopher Lee, Ann Hathaway and many more, you know that there is tremendous power behind this movie.

USA Today gave us a sneak peek at the first real character images from his Wonderland Movie. The film which is sort of a sequel to the original Alice in Wonderland will be hitting big screens on March 5, 2010.

With Johnny Depp, Alan Rickman, Christopher Lee, Ann Hathaway and many more, you know that there is tremendous power behind this movie. Now we get the great chance to see a little bit of what to expect and learn a bit about the story.

The traditional tale has been freshened with a blast of girl power, courtesy of writer Linda Woolverton (Beauty and the Beast). Alice, 17, attends a party at a Victorian estate only to find she is about to be proposed to in front of hundreds of snooty society types. Off she runs, following a white rabbit into a hole and ending up in Wonderland, a place she visited 10 years before yet doesn’t remember.

Among those who welcome her back is the Mad Hatter, a part tailor-made for Johnny Depp as he collaborates with Burton for the seventh time. “This character is off his rocker,” Zanuck says.

Aussie actress Mia Wasikowska, 19, best known for HBO’s In Treatment, has the coveted title role. “There is something real, honest and sincere about her,” Zanuck says. “She’s not a typical Hollywood starlet.”

There is the usual Burton-esque ghoulishness (Helena Bonham Carter’s Red Queen, whose favorite retort is “Off with their heads,” has a moat filled with bobbing noggins), but Zanuck assures most kids can handle it. “The book itself is pretty dark,” he notes. “This is for little people and people who read it when they were little 50 years ago.” 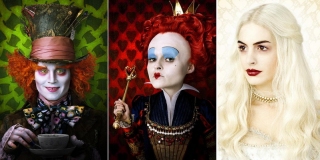 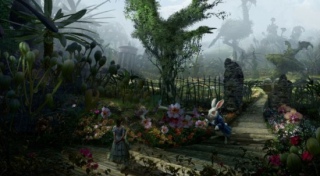 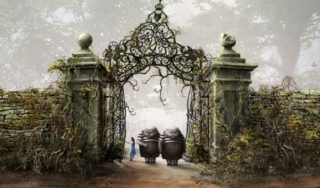 One thought on “First Look: Check Out The Characters From Tim Burton’s Wonderland”